Call of Cthulhu: Eye of Amara — Meet the Characters 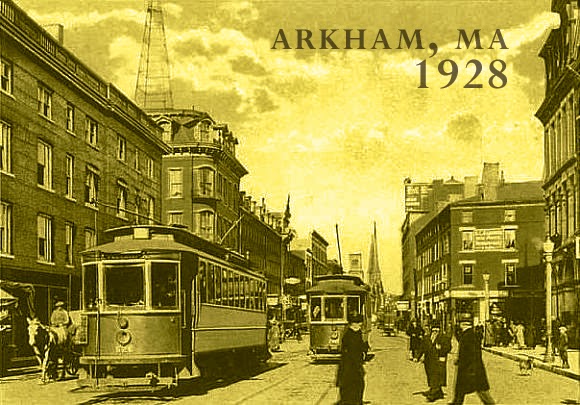 One of the groups I regularly play in—Evan's Nightwick/Uz/Et Cetera group—has taken a brief campaign hiatus, and I've stepped in to run some Call of Cthulhu. This will be only the second time I've run Call of Cthulhu scenarios using the BRP rules, after a short and violent experiment with Masks of Nyarlathotep last year, which I would get back to, at some point. Most of the time I use Trail of Cthulhu. I suspect the first couple sessions will be a little rough going, as I work out differences in the skill lists and assumptions of character competency.

Our first session was  players voted from three options for campaign organizations to belong to—and promptly tied all three. The choices were:

• A group of students at Miskatonic University.

• The Eye of Amara Society, a group of aesthetes, eccentrics and seekers who share their theories of, and experiences with, the supernatural.

• Members of a particular long-standing Arkham family, named at character generation. Characters can be related either through blood or marriage, or rely on them for employment.

After some tie-braking dice rolls and hem-hawing from the Keeper we settled on using the Eye of Amara as out base organization, but as you'll see, the stamp of Misk. U. is not absent from party.

The Eye of Amara Society (from Keith Herber's seminal Arkham Unveiled) is a small occult discussion group led by the theatrical, indolent Jason Gaspard. I'll post a more detailed look at them later.

Pip Huxley III is a perpetual grad student in the Department of Classical Studies at Miskatonic University. He funds his long-running, wide-ranging thesis on the cuneiform of cylindrical seals ("Cylindrical Seals: A Circular Argument?") with his family's funds, gleaned from the unending river of profit that is the stock market. He lives in a the boarding house near the Misk. U. campus and spends his time off in a blind pig north of the river.

Professor Lancelot F. Simms has seen better days. Since the death of his wife, his monomaniacal devotion to illuminating the world with psychoanalysis has dominated his entire waking life, to the exclusion of his two grown children and his former associates at the Miskatonic Club. He's joined the Eye of Amara society as part of a project to expose their flimflammery and write a popular book on the subject along with the head of the . Since letting go his house staff, his Victorian mansion at the corner of West Washington Street and Hill Street has begun to resemble its owner in crumbling decay.

Robert L. Ashton, a pulp writer of some voluminousness, if not renown, has ended up in a tenement at 615 S. French Hill Street in Arkham, which he shares with his cat. He scuttles about the town's libraries, bookshops and the Exhibit Museum doing research and seeking inspiration for his weird adventure tales.