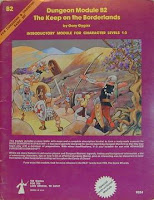 Despite its place in the pantheon of early D&D modules, and its almost-platonic structure (home base, wilderness map with keyed and unkeyed sites, leading to a large dungeon), B2: Keep on the Borderlands falls down in the dungeon department. While the map is intriguing, and the immediate branch-point of up to eleven possible directions to explore is a more initially-impressive situation to present to players than you get with most dungeons, the content itself sticks close to the idea of D&D as a tactical wargame, presenting you with a number of areas primarily inhabited by humanoid aliens who are distinguished only by their HD. The fantasy element is rare here — only showing up in certain treasure items, a couple oozes, one irritating magical hazard, and then some evil cultists and undead at the presumed end.

Whether I’m just a jaded millennial bereft of the sense of simple wonder of fighting ‘bugbears’ and ‘gnolls’ that nerds revelled in in 197whatever, or whether it’s just not a great dungeon, I’ve long mulled over doing something ‘in dialogue’ with the Caves of Chaos. The first version of the project appeared here as ‘Chaos on the Old Borderlands,’ material from which I’ve reused for my current Elderwold campaign (sans the Keep dungeon). Recently, inspired by Dyson’s completed redraw of the caves and rereading some old Alexandrian posts, I decided to try restocking the caves into something a little closer to my particular D&D interests.

The first step is refreshing my memory of how the areas are separated, and what their contents (mechanically) are:

Again, you can see how the majority of these dungeon zones are distinguished thematically by political divisions rather than landmarks, environmental conditions, differing ecosystems, magical effects, aesthetics, etc.

I haven’t done the math here, but just eyeballing the sheer number of rooms with monsters in them is way over the B/X stocking recommendations. I think the first thing I’d do, before changing anything else, is cut down the overall number of encounters (and probably reduce the total HD per zone, unless I were running it for a higher-level party).

While the idea of factional differences as well as zone themes isn’t one I want to wholly discard, I think its important to tie them together and add in mechanical differentiation, plus the kind of details that makes exploration in D&D an intrinsically enjoyable part of the game (rather than simply a precursor to tactical engagements).

Next time I’ll address the thing B2 completely leaves out — the history of the dungeon — and make some decisions as to new zone themes.
at October 03, 2018