The Red Manse of Oumkha

Those adventurers who seek the mysteries of the Pharos strike out from the Red Manse of Oumkha, a paltry oasis of humanity within the eerie vastation of Yond. Its crumbling reddish-ochre walls date from the rule of the devil-kings of the Pharos, when it served as the dwelling-place of some unknown viceroy, warlord, or hierophant. It is only one of the ruins ringing the outer approaches of the Pharos, but gained notoriety amongst the Yondorkandi as the dwelling place of the madman Oumkha, once apprentice of the doomed Arbaz who disappeared in the shadow of the Pharos.

A few years ago, the heterodox, vermillion-robed Daughters of the Maugourah came to reside there, beginning to clear the rubble and replace ruined stone with wood and brick. The sisterhood persevered in the midst of the prowling horrors of the wastes, and since then, the Red Manse became a stopping-place for the exiles and wanderers who people the region, eventually taking on the quality of a small market village.

More recently, a soubashi of the far city of Aburuz has arrived with a troop of guards, dispatched to assert the authority of that city over the settlement of the Manse. He wisely does not press the issue with the locals, and spends most of his time in some (relatively) palatial tents outside the Manse. 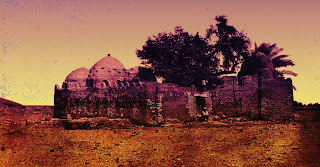 The Manse itself is built around two courtyards. The southern, fountain courtyard is where newcomers water their animals, and is overlooked by the apartments converted into the House of the Magourah. This section, except the old shacks clustering around the south side of the House, is closed to outsiders. The northern market atrium, once a tiled garden, is now filled with the tents and shacks of scavengers and craftsmen.

A berm of rammed earth stretches to the west, remnant of some fortification from past ages of Yond. The Soubashi’s tents are northeast of the market atrium, along with the ruder dwellings of the cactus-gatherers, hunters, and smiths. 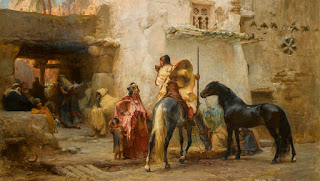 Most of the population of the Manse is temporary — beggars, exiles, heretics, escaped slaves, refugees of war, criminals fleeing the law, muck-farmers, mushroom-gatherers, hunters, scavengers, dust-sifters, dew-collectors — but a few personages stand out as more constant dwellers in the Manse’s walls.