"I think I just lost san.
Your OD&D/Gumshoe mashup? Could you elaborate? It sounds fascinating."

It's basically GUMSHOE with the D&D stats in place of Investigative or General Abilities. CON is Health and WIS is Stability (although the latter hasn't come up yet).

Then players get some feats traits skills with simple mechanical bennies, mostly a free point spend on specific actions, with a couple magic powers and make/disable traps and brew potion/poison/alchemy crap thrown in for good measure. I've gotten a little bit of use out of the Esoterror Factbook's called shots chart, but otherwise it can be run with just my copy of Fear Itself–and usually, not even that.

I kludged it together to run it for a group made up mostly of new players with variable-to-short attention spans. I started with a medievalized version of the Fear Itself ability list, but then I remembered this, and I decided I should make everything as simple as possible. My character sheet isn't quite as simple, but it's pretty close–Six numbers, three skills, and a name if they feel like it.

Chargen takes about two minutes, which is mostly me reading the list of skills off my screen. We've had two sessions so far and they're doing great; the dwarven princess( ? ) and the goblin fighter just busted into the abandoned temple of St. Cuthburt Lord Yama and the elves and the bard just intercepted a bandit scouting party in downtown Homm-Let.
at March 12, 2010 No comments:

Chintinous thrall-soldiers, the spoor of dead Yaddith, reap the flesh of the Scavenger Tribes to feed the ravenous bio-pits of the Insect Lord...
at March 06, 2010 No comments: 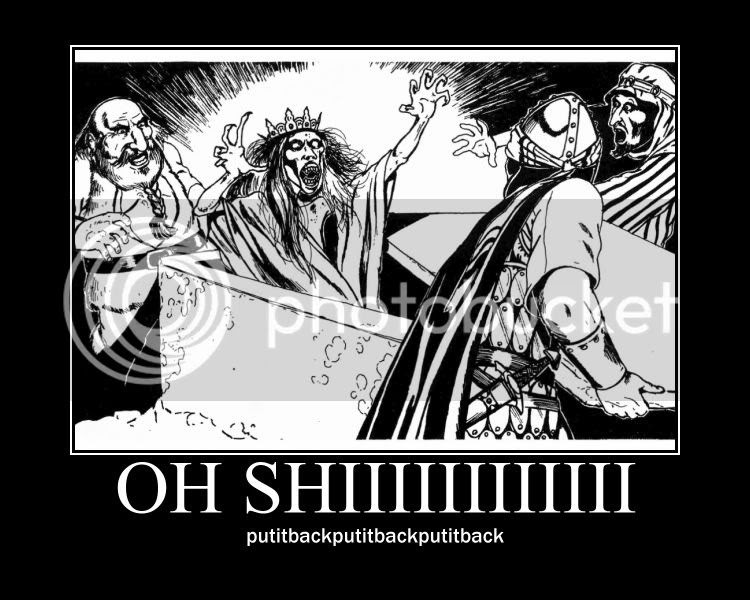