This month's Page XX over at Pelgrane Press has another piece I did for Ashen Stars, their upcoming space-opera freebooter detective game. Take a look!
at April 25, 2011 No comments:

GINNUNGAGAP, THE VOID BETWEEN

GINNUNGAGAP, or Ginn-Heilagr, is a yawning void that exists along what was once the terminator of a tidally-locked planet. This realm was home to primordial beings of immense learning and skill. It is said that they understood the fundamental nature of the cosmos, and in this were akin to Gods. Here, in the twilight ring between eternal fire and eternal ice, they built a heaven for their immortal bodies. They crafted hardy servitors to travel into the inhospitable realms on the sunward and spaceward sides of their world. Age after age came and passed, and they had lived so long and in such power and among so much encircling beauty that they forgot their own histories and names, believing they were always as they were and that they would be so forever. 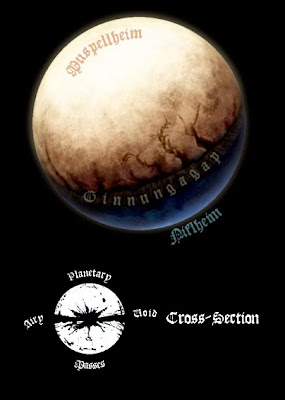 Perhaps the forces of Chaos envied their joy, or ennui drove one of their number to rebellon or madness, perhaps jealousy or some rivalry drove them to summon uncontrollable powers, or some immutable Law decreeded that change must come to the unchanging. To the pitiful survivors, the cause is unknown and probably irrelevant. Their world ended when the planet was shattered in two; the land at the planet's habitable twilight dropped away, made into dust, or simply vanished. A whole disc was simply ripped out of the planet, which is now two hemispheres separated by a vast airy space, charged with swirling energy of Chaos and black aurorae of uncontrolled magical emanations.

Descendants of the servitors who weathered this apocalyptic moment eke out a living on the edges of this gap, on the chunks of material floating within, or on rugged vehicles they construct or salvage which traverses the interior void. They are few and far between; most of the planet has been given over to the horrific beings of Chaos, who scuttle and linger in the darkness of Ginnungagap. Some, though, have taken forms to inhabit the harsh twin half-worlds on either side of the void.

One of these half-worlds worlds is Muspellheim, the fire realm, bathed in fierce light and radiation by the three suns. The flat deserts are almost deserted of all but the seething wind-things, which are tasked by the multitude (and multiform) demon warlords of the rift valleys and jagged mountain caves with carrying messages and watching the borders of the realm.

The other is Niflheim, the rime-place, a black expanse shrouded in the swirling icy mists made by scouring winds blowing from Muspellheim. Unlike the ever-changing fire realm, Niflheim is in the grip of one single being, a multi-aspected, face-stealing demoness named Hel. The creatures which serve her claim that in her ice-spined castle, at the uttermost pole of Niflheim, she holds uncountable souls in crystalline stasis, and that all living are destined to become her prisoners upon death.

The inhabitants of Niflheim, Muspellheim and the Ginnungagap raid each other for prisoners, food, or what treasures remain from of the Gods' great lost civilisation.


This is just an idea I had this morning, along the lines of 'If the New Gods came after Thor, Odin, et cetera, what was the world before Asgard like?' And so, Ginnungagap by way of Jack Kirby. A later post will have some locations.
at April 16, 2011 No comments:

The skills are going to be the same type of thing as version 1.0, since they're tiny enough that I can make them up on the fly, or change them midgame without a total rethink. I'm thinking that, in addition to the 'brew potions' and 'make/disarm traps' knowledge skills, I'm going to add some that cover the three investigative ability categories (or rearrangements thereof) to try and keep interrogating the game environment cheap for characters. There's always that one guy in the party that wants to be the one who knows everything about stuff, too. Or at least wants it written on their character sheet.
at April 09, 2011 No comments:

The Onomastikon is a great resource, but sometimes I get tired of wrestling with it's geocities-era layout. To fill the gap, here's a quick and dirty fantasy name generator. There's no limit to how long the name may be, but shorter names (maybe three to four letters, or two syllables) is a suggested upper limit. You and your players are going to have to remember them, after all. For the same reason, it's best to start with different beginning letters, and vary the vowel sequence too (so one 'ah-oh' and one 'eh', not two 'ah-ah's, hanging out together).

To start, roll a d6. Even numbers get you a vowel to start, odd ones get you a consonant.


Finally, if you're trying to tie the names together, you can add a suffix. These suffixes can either call back to real-world cultures the fantasy world is trying to evoke, or simply establish a sense of cultural unity through repetition. Here's some sample suffix lists to get you started.

Beware The Idle On March

Actual work impedes on spec work, yet again, and so I miss another year of the One-Page Dungeon contest. It's interesting to note other people had some similar ideas as the one I was working on, though. Chance aside, I think we're just working through ideas for distinctive dungeon-like environments at a predictable pace. One-Page Sinster Cthulhu Cults or One-Page Disjointed Panchronal Multiverses can't be far behind. Maybe next year.

I might clean up some of the rough ideas I sketched out and post them anyway. People can always use more geomorphs, right?

In other news, I'm actualy posting comments on things, which probably means I need to get the hell away from this computer.
at April 01, 2011 No comments: