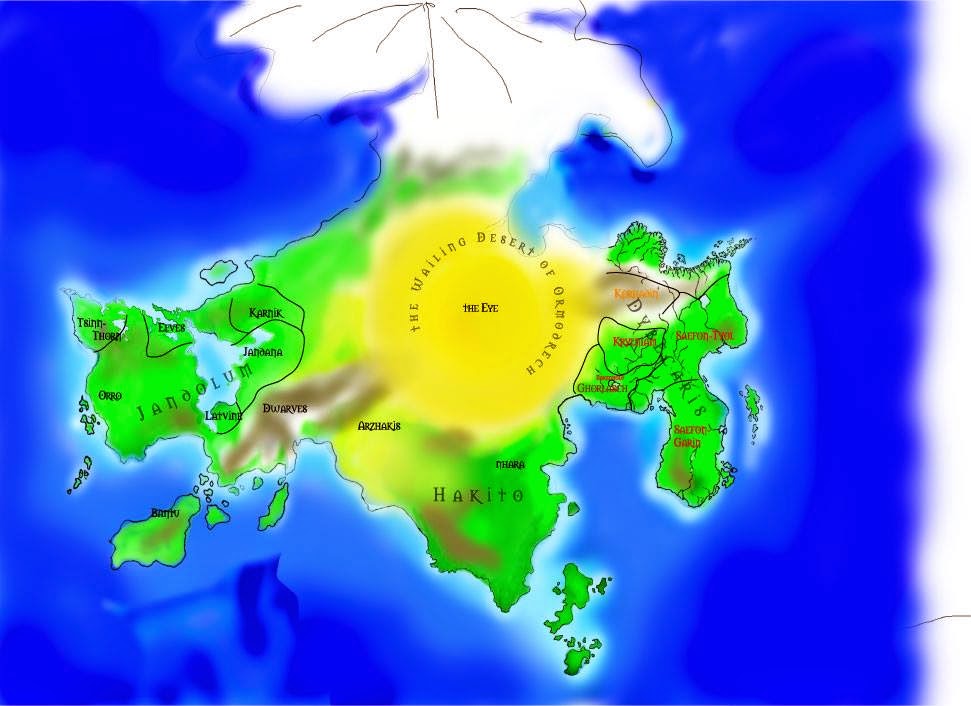 The world map from the first campaign I played in during high school. I was the group cartographer by virtue of being the best at Photoshop, I think. This version was based off the GM's map, and I basically just added crazy coastlines to everything.

The campaign's GM got one half of the planet (the west half) and another group member got the east half, and was also planning to run a campaign set there, but that one didn't get off the ground, probably just because of group focus issues. A third player, if I recall correctly, enforced dwarven orthodoxy to the Warhammerian mold (and is now a blacksmith). I think I pestered them into giving me nominal responsibility for the middle-southern peninsula, which, as the name implies, was the faux-Orient of the world. (Oriental Adventures 3e had just came out, and I was enamoured of their cool dragons and spider-ladies.) Aside from the "Hey, hobgoblins should be a PC race!" thing I didn't end up doing much, and anything I ran would have to compete with one actual and another theoretic campaign for time.

The campaign was mostly adventures from Dungeon tied together by a chain of hunt-the-artifact voyages. My character joined midway through "Raiders of Galath's Roost," just in time to wipe out an entire fortress from the inside due to PCs understanding bottlenecking better than the guy who drew that map. The adventure, says, "The adventure ends when the PCs leave the fortress," somehow assuming that we'd pass up a free fortress, and significant planning went into rearming and restaffing the place on the assumption that... we'd... uh... I don't know, but we had a castle, dammit. The next high point came during that 4th level sweet spot and the little slice of Fantasy Fucking Vietnam that was "Rana Mor." We fought a chuul on our riverboat, and that particular near-TPK was probably one of the best (read: most interesting, most desperate) fights I've played in any RPG since. I triple-critted a giant snake, too. That was nice. And to cap it all off, we figured out some stupid loophole in the trap at the end of the adventure which let us get away with approximately 13 times the amount of treasure intended.

I ended up dropping out of the campaign after getting fed up with high-level 3rd edition. Girallons are a stupid monster and I don't know why they'd be janitors for a vampire. Apparently not long after that, the party got TPK'd by some frost worms. Considering how often character deaths and extra-brutal fights started happening once we hit 10th level, I think there was something mechanical going on. Aside from me (dwarf fighter/cleric/rogue... with the Run feat!) the rest of the party was pretty thoroughly minmaxed—hell, they made 20th level characters to 'spar' while waiting for people to show up. Anyway, the frost-worm thing coincided with people going to university, and the campaign was one of those save-the-world dealies where ignominious TPKs not only made it a huge hassle to restart, it also messed with the tone enough to put people off.