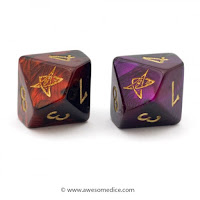 One of the things I’ve always liked about Unknown Armies is the amount of information it derives from a single d% roll. The retention of funny dice is my main complaint with the RuneQuest SRD family of games (OpenQuest, Legend, Delta Green, et cetera), especially since they usually only come up in very specific circumstances—HP and Sanity loss. (I have the same problem with 3e-era games. Conversely, S&W White Box’s focus on only two die types is the main thing I like about it.)

Unknown Armies’ method of reading percentile rolls for damage results, however, doesn’t translate directly into RuneQuest SRD games due to Unknown Armies’ HP scale is also on a percentile scale (with 50 being the equivalent to RQ’s 10 HP).

The following is a set of suggestions for reading a d% roll, such as an Combat Style attack roll in RQ, to derive a damage result for a RQ scale of HP (i.e. 3-18, with an average of 10). To use these damage code suggestions, choose which of the damage codes you want to build a damage scale from. Since codes these are awkward to note in weapon or monster statlines, I suggest choosing a small subset of damage codes (5-6) so that the players can memorize them. Then name or number each damage code you’re using on the scale (for example: very light, light, medium, heavy, very heavy) and then assign one to each source of damage (weapons, hazards, whatever). You can either do this ahead of time, or just key each damage code to a die type or range of die types for on-the-fly conversion.

At some point I might make this post or a variant of it available as a PDF product (with OGC licensing). Please let me know in a comment if that’s something you’d like to see.

Notes: Because the attack rolls are rolled under a skill %, any code will have a slight scaling effect based on the attacker’s skill, as the range of successful rolls will restrict possible results. For example, someone with a skill of 50% will only have a [%-10] damage die range of 0 to 5 in any successful roll (for an average die result of 2.5). This makes estimating the lethality of various sources of damage slightly more complicated.

These codes are slightly more complicated:

Here's another template for geomorphs, this time with some sections alongside each geomorph for keying its contents. 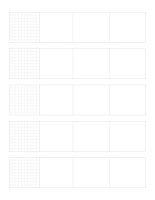