One of the challenges I often face when designing D&D campaigns is what I refer to as "the whole deal." Even if I'm starting a campaign with a small hexmap or a single dungeon, I get stymied when figuring out the rationale for default D&Disms like elves, orcs, and the various kinds of magic. I might post more about this later, but the TL;DR here is that, to solve this problem, I often develop campaign ideas starting from games I've played in. Here are two ideas I have that have originated with the Nightwick campaign run by Evan of In Places Deep.

The Corpse-City of Kar Hadash
Setting: The ruined city of Kar Hadash, on the coast of the Desert Lands, far southwest of Nightwick Abbey.
Vibe: Ruined city megadungeon in a late medieval southeastern mediterranean

Centuries ago, the Lawful Empire of Man invaded the isle later known as Zenopolis and deposed the cruel dynasty which was preeminent amongst the isle’s kings. The last survivors of the dynasty fled with their secret treasures across the sea to the Desert Lands. There, they founded Kar Hadash, the ‘new city,’ and brooded over their plans for revenge and supplicated their demonic masters for foul boons. It became a pirate port and den of wickedness renowned the world over. It is no wonder, then, that it was one of the first places laid waste by the crusading Sword Brothers.

For centuries afterward, the city was a charnel house and dwelling place of naught but ghouls, but now rumours of resurgent cults, strange prophecies amongst the desert tribes, and piratical pretenders to the ancient throne have drawn a new generation of crusaders and tomb-robbers to the dead city. 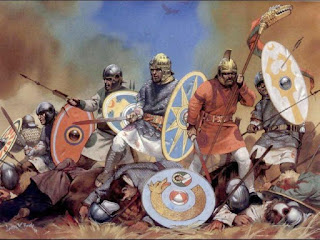 Raiders of the Lost Empire
Setting: Atalia, the Desert Lands, and isles of the Starry Sea ~1400 years before the Nightwick Abbey campaign
Vibe: Sword and Sorcery Rome in the age of the Crisis of the Third Century.

The revelations of the Empress have transformed the Empire. The miracles of those initiated by Gax Ovo have transformed the world. As those who hear the holy thrumming Law and those who hew to the Old Gods (and worse) split the empire in revolt and revolution, the ancient temples and nemetons of ages forgotten are ripe for overthrow and plunder. Noble zealots and ignoble vandals seek out the treasure-vaults of the Empire’s Old Gods — Orcus Oath-binder, Apollo Far-shooter, Hermes Soul-taker — and try to stay out of the way of the clashing legions of the riven Empire.
at December 21, 2019