• Needham begins his investigation into the financial history of Michael Thomas, pastor of the Chapel of Contemplation by talking to Father O'Leary, a salty old priest in the North End.

• Jacob interviews a new maid to care for his children, and lays out the rules governing their care. Esther hands him an address.

• George, Marty, Ephraim Weaver, Carl Standford and Ralph Gilman and sundry others are relaxing in the Silver Twilight lounge; Ralph invites them to a seance he's arranged in one of his father's properties.

• Fred gets a call from Carmenelli, inviting her to a seance that night.

• Needham, tracing the way to the old Chapel of Contemplation, talks to a few more characters in the North End, which point him to a narrow, empty lot down a North End alley. He avoids falling into the crumbling floor tiles, and finds his way into a hidden subterranean section of the old building. There, he found skeletal remains of former members, a mysterious, crumbling book, and a selection of their old records. He takes the book and financial records for consultation later.

On the way out, he's accosted by two local youths of unpleasant disposition, but some skillful gunplay and the crumbling architecture allows him to make his escape.

• Iolanthe hits some local archives to do some research for the sake of making her act more convincing, uncovering the history of madness that surrounds the residence. She picks up a likely name to pin on the 'restless spirit' she'll contact later: Walter Corbitt.

• Fred grabs some occult 'artefacts' to salt around the house, when she arrives.

• Jacob gets dressed for the evening, and delivers further instructions to the maid to avoid the 'artefact' room.

• Needham, on the way to an address he discovered in the Chapel records, encounters an odd man doing a painting study of the house.

• Carmenelli introduces everybody, the Hermetic Order members and Cecile X arrives, and Marty checks out the rooms upstairs and peers down the basement steps.

As Iolanthe invokes the spirits, they hear scratching noises from below and a thumping from above. Events come to a crescendo as Iolanthe, continuing her act, asks if Corbitt is the one disturbing the house, and what they want—at which point, she croaks out "DIE!" and blood begins to splatter the table from above.

• Needham, Iolanthe and few others decide to book it. Marty, George and Jacob decide to investigate the source of the blood by revisiting the rooms upstairs. The people outside see something send the glass from one of the bedroom windows flying outward—Jacob narrowly avoided being hurled out the window into the alley of junk by a rusty bedframe.
at June 18, 2012 No comments:

Here's the list of PCs for my Trail of Cthulhu miniseries campaign. The biographies are perfunctory, reflecting the lack of play behind them; I like to develop backstories in game.


The characters are organized based on patron.

HERMETIC ORDER OF THE SILVER TWILIGHT

A Harvard alumnus with an ongoing sideline as a boxer, looking to jump-start a career in politics. To do so, he's become a Neophyte in the Boston lodge of the Hermetic Order of the Silver Twilight. Friends with Marty McTavish, bodyguard of a fellow lodge member.

Personal bodyguard for Ephraim Weaver, an Initiate-level member of the Boston lodge, and friend of George Mewhinney, a Neophyte. Still suffers from amnesia concerning an incident three years ago.

Formerly in the employ of an eccentric gentleman (Rodger), he's awaiting a new assignment with the Rochefort Detective Agency.

Medium who works out of her house.

A forger of antiquities and "magical" relics, with an unusually earnest take on her profession.

Recently returned from a dig in the Middle East with four children in tow. Alienated from his former family, he's fallen into the orbit of Cecile X.

Some of you might be thinking, "Seven players in a Cthulhu game? That's crazy!" I agree. And at least two more are likely to show up. Not only that, I'm trying something ambitious (for me) with the episode hooks. Instead of creating characters that initially know each other (a la Delta Green), or starting with the characters thrown together via sudden disaster, I've given them the choice of five different patron groups. Most of these groups are interested in esoterica, weird occurrences, or the occult, but with different exoteric facades. The patron groups interrelate, in some obvious ways (like the ASPR and BSPR), but also in secret ways they may discover. With the first few sessions, as I introduce them to lower-key scenarios, I'll attempt to stitch together their patrons, their personal backstories, and goals, before pulling the thread tight and knotting them together. Those of you who know the Delta Green backstory can probably guess where this is going, but I'm keeping that off-stage for now. To complicate it more, I've got a mix of people new to tabletop games, people new to Call of Cthulhu, along with the more (cough) seasoned players. We'll see how the first threads are sewn in the next few weeks.

I'm also considering developing meatier personal arcs to throw at them, either in collusion with the player or by twisting what they've already given me via the Sources of Stability. Trail's sister game Fear Itself includes more starting points for  creating soapier sessions, which I want to use to focus on the PC's unraveling personal lives—or, in this group's case, unraveling relationships with their pets, and the pursuit of their pet projects. Sometimes, like this time, the PCs already give you plenty of fodder for really twisted scenarios. I don't want to waste it.

This week's session, after character creation, I started with a little vignette of a few of the characters in an unlicensed boxing match; not every got into the scene, but at least one of the characters got to take some hits on the chin before getting drugged and contributing to a bar brawl.

How next session begins depends on who exactly shows up.
at June 10, 2012 No comments: 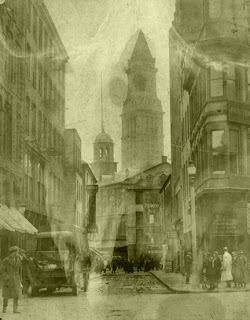